Skyla is 99% effective birth control. The Skyla IUD is a device that is inserted into the uterus and can be worn for up to 3 years. A woman choosing this method wants long-term birth control. However, if that changes and pregnancy is desired, the IUD can be removed at any time before the 3 year limit. The IUD is inserted by a healthcare professional during a woman’s menstrual period. Skyla is designed especially for young women who have never been pregnant. This IUD has a lower dose of hormones but is still 99% effective, like other IUDs. It is also smaller in size and reduces possible discomfort during insertion.

Skyla provides protection for three years, a shorter period than other IUDs. Like all IUDs, Skyla can be removed by a physician at any time if conception is desired. All of these features make Skyla an increasingly popular choice for younger women.

How safe is the Skyla IUD?

The first several menstrual periods a woman has with an IUD inserted may be heavier and cramping may be experienced. However, because of the low hormone in the Skyla IUD, after approximately 3-6 months a woman’s menstrual periods will lighten considerably and may even stop after a year. Using the Skyla IUD carries a small risk of ectopic pregnancy, sepsis (a rare, but life threatening infection), PID, bleeding between periods, uterine cramping and unwanted pregnancy. 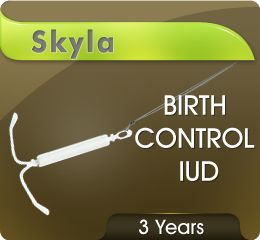